The terrestrial part of the trip starts unexpectedly badly, with a raging migraine and a feeling of “why did I sign up for a tour?” as we meet the others with whom we’ll share a bus and myriad adventures for the next 8 days. I’m in Windhoek, Namibia, the starting point of this bus-and-bush trip across Botswana, travelling with a friend I met on my trip to India. The ghastly first dinner helps the migraine not at all; I hate vomiting in unfamiliar surrounds. But with optimistic hats on, we are determined to make the most of the days and experiences ahead.

To get to Africa, I’ve first bounced for 9 hours on one continent – Asia – where a long layover afforded me a state-sponsored city tour of the weird city of Doha, an uber-riche oasis in the Arabian desert. Surrounded on 3 sides by the Persian Gulf and one by Saudi Arabia, Qatar, they say, is the richest country in the world. Oil, oil and more oil… Elaborate is the first word that comes to mind of the airport here, as the Adhan (call to prayer) resonates throughout the cavernous modern space. One stop on the city tour is the man-made gated island, The Pearl (called this because oil displaced pearl diving for its #1 industry), for Qatari residents only – the workers are accommodated in single-room worker housing and paid $300/month for labour on the massive amount of construction going on here, least of which is FIFA World Cup 2022. The Pearl, in obnoxious contrast, boasts exquisite waterfront housing and a mini-mall replete with Ferrari and Rolls Royce shops, flanked by Hermès, Gucci and other designer boutiques. Regrettably, we only have 10 minutes at this stop so I won’t even have time to choose the colour of my Ferrari. We don’t get a tour of the worker residences, but we are allowed an hour or so to wander the Souq Wakif, their enormous traditional market where I wend my way to the spice section, past all manner of vendors. A small treat in advance of my 10-hour flight to Windhoek.

The old port and the Islamic museum designed by IM Pei

Not enough time to place my order

Having spent many long flights beside over- and under-perfumed humans, large and small, awkward and fidgety, I was delighted to be seated next to a charming and adorable bush-pilot-turned-private-jet-captain, returning home after a 3-week globetrotting stint. We struck up conversation immediately; books and travel and world views. Pas mal, as they say.

Still chatting away, we step off the plane and into the silky Namibian air. It has a texture I can’t place; clean and pure as if it has magical properties. The sky is a cloudless, crystalline blue. The temperature, a perfect 20°C; the morning chill lingering for now.

My seat-mate issues my first “Welcome to Namibia.” This is the 2nd stranger from a plane I’ve sat next to (the first was a lovely woman from Joburg on the Boston-to-Doha leg) who’s insisted on connecting on WhatsApp just in case I need help while in their homeland. I think: we don’t do that enough where I’m from. One of the amazing things about solo travel is the ability to remove walls and preconceptions…there is an immediacy about the interactions you have, where the minutiae around what you do for a living and other small talk has no place because the connection and the conversation is time-blocked. There is simply no room for fluff. 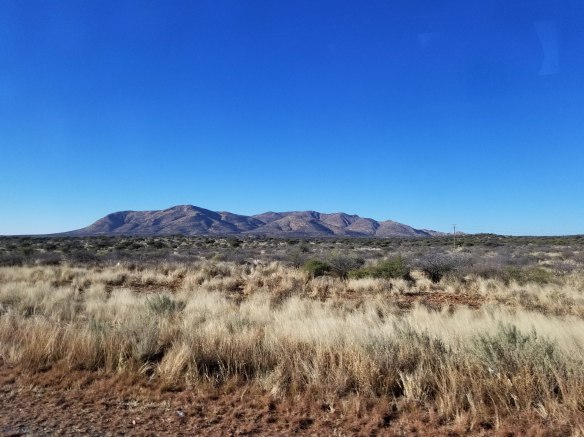 On most road trips, one expects to see a smattering (and, alas, the splattering) of animals along the sides of the highway; where I’m from it’s deer or red-tailed hawks or woodchucks. But we’re on the Trans-Kalahari Highway, and as such, in the first 20km of open road we begin to see a troop* of baboons and their infants**. We pass a sounder* of warthogs and their piglets**, some round ground birds (guinea fowl) that I later find out are nicknamed Chobe Chicken; an ostrich, yellow-billed hornbills, iridescent and shiny-breasted starlings…and this is just the small stuff. Note to self, as I gaze out at the Kalahari savannah rolling by the window: this moment is time-blocked as well. Fluff has no place here in the desert.

We cross the border into Botswana with little ado, and each of us receives a condom from the immigration folks; a sobering reminder of the fact that 25% of the adult population here has HIV/AIDS. 18 of us on the bus, and we let that sink in: our collective Western privilege acknowledged.

As we drive towards the bush huts in which we’ll sleep that evening, we begin to see more animals (in no particular order): zebras, giraffes, goats, sable, impala, more ostrich, oryx, dik dik (a very tiny antelope), kudu, lilac breasted roller (a gorgeous little bird), and – at last – an elephant (or twenty). We are not in Kansas anymore, although the terrain is just as flat. We’ve already driven something like 5 hours and I’m just starting to get my head around how big the Kalahari, and Africa, is.

The road to our bush camp is straight and flat; vast swaths of scrub brush as far as the eye can see. We’re on the upper edge of the Kalahari proper, tho the animals are not much aware of boundaries. The low scrub brush is interspersed with dusty green desert trees and random baobabs, their roots seeking moisture in the red earth carpeted in desert grass.

More stats: 84% of Botswana is covered in sand; and the Kalahari Desert comprises about 70% of its land. We’re entering a dry, sparsely-populated area (most of the population lives in or near the capital in the southern part of the country), home to the largest elephant population on the planet. The preview elephants we’ve seen so far have whet my appetite (not literally) for more. 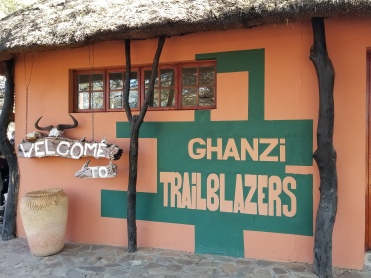 Bushmen without a bush.

Our lodging for the night is a cache of bush huts on a tract of the Kalahari. Botswana residents are entitled to land from the government, but with it, they are required to do something of use: tourism, farming, etc., so we see roaming goats, cows, horses along the highway; not unlike India, I think, anything might cross the road at any time.

The camp is a swath of lump-looking pods with doors, each containing a couple of cots. Quaint, pseudo-authentic, rustic. Despite the 25° day, it will be 8 or 9° tonight, but at least we’ll have walls between us and the desert…and it’s too cold for snakes.

Our hosts have set up this mock bush camp to teach tourists about the ways of the bush. It’s sad, I think, that the San People (bushmen) need to put on a tourist show to keep their traditions alive; government regulations have all but made their lifestyle of hunting and gathering obsolete. Their language and way of life will die out within a generation or two. Indigenous people were pushed out of South Africa and more fertile lands towards the arid and impossible Kalahari, and so it is like a slow starvation made possible by Western colonization and modernization. 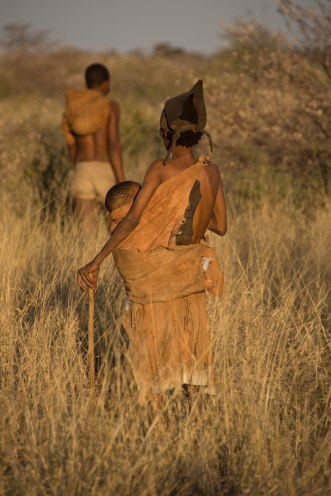 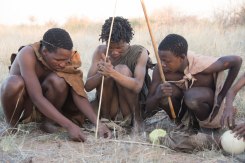 The first activity is a bush walk. It’s more a staged demonstration by a few San People, who have changed into traditional garb and driven in for the show. I feel a bit of a voyeur, watching them practice their gathering skills (hunting is prohibited here). The film The Gods Must Be Crazy was made almost 40 years ago and perhaps foreshadowed their brush with modern society. And as we walk with them along the quiet, dry path, I can’t help but wonder if the land was once teeming with animals. We’re encouraged to ask questions and take photos as a means of remembrance; historical preservation: spread the word lest we be forgotten. I oblige because the images are stunning, but I feel simultaneously patron and rich western foreigner taking advantage of the locals. Isn’t this what got them here in the first place? The day closes out with dinner and more of the San show: traditional singing and dancing by the fire.

As the new day greets us with its 5° chill, I dress quickly in the pitch blackness of a Kalahari morning. The African sun rises without fanfare as if it knows it’s in high demand this day. As quickly as the sun pops over the horizon, we’re on the road just after brekkie to see the Okavango Delta. Visions of Nat Geo specials dance in my head….

[Part II: Into the Okavango!]  [Part III: The magic of elephants]

There was an error retrieving images from Instagram. An attempt will be remade in a few minutes.