You cannot run away from your own mortality. As such, I did the next best thing. To celebrate this absurd and somewhat surreal 50th birthday, I conjured up the most preposterous answer: a weekend getaway to the birthplace of joie de vivre. Ah, The City of Lights, where Tango is danced (preferably for not the last time); absinthe and champagne flow freely; a moveable feast, where the definition of art and culture and fine food emanates from its every time-worn cobblestone and stone arch, from each outdoor café, fromagerie and brasserie. This magical, medieval maze of rues and avenues where Gargoyles watch from on high like grand bacchanalian overlords, egging on the tiny figurines as they revel in the daily appreciation of small-to-medium-sized indulgences. I had not been to Paris in 25 years.

Laissez les jeux commence… I needed that frame of mind when I realised, standing in the clusterf*ck otherwise known as Charles de Gaulle Airport immigration, it would have been faster to fly direct to Amsterdam and take a train to le Gare du Nord, where I was to meet my birthday weekend playdate. A preposterous 4 hours from the time my plane’s wheels hit French tarmac to those of my valise hitting the pavement on la rue Dunkerque, where an old stone building melts as a parody of itself, and my dear friend with his warmhearted smile waits more patiently than necessary for this sleep-deprived, travel-weary and absolutely famished birthday girl.

C has chosen a fabulous (and equally unexpected) B&B, essentially a guestroom in a lovely couple’s fantastic flat in the 10e arrondissement, a quirky neighbourhood that borders Le Marais, walking distance to everything else we’re to explore in the coming days. I’ll get out of the way that B&B Bouchardon was the most comfortable, charming, understated (whilst being utterly chic and meticulously appointed) bed and breakfast I’ve ever visited. The breakfasts were as delectable to the eyes as they were to the palate. The hosts, Frédéric and Jozsef, made us welcome as if old friends (C had stayed here a couple years earlier, and the mutual warmth clearly has not worn off). And so, almost immediately upon arrival, the champagne toasts commence.

I don’t drink much on the whole, and I’ve not slept or eaten in at least half a day, so we set off for a spot of lunch (Syrian Smörgåsbord, as it happened) and a wander around the neighbourhood to stave off the inevitable end-of-adrenaline, lest I fall over and ruin my own birthday party. We stroll the streets and into Le Marais with all its quirky energy and shops galore. Fresh autumn air does a body good, so we venture to Île de la Cité and Notre Dame to look for hunchbacks, find none, and settle for gargoyles. On the way home we pass a patisserie in whose window I see meringues the size of a smallish hedgehog (this alone should have been the giveaway), and I decide to indulge my curiousity. The real hint came when the store clerk asked what colour I wanted: pistache, naturallement, erm, vert. Tant pis, I think, as the non-pastry fails to live up to its potential; another day, another macaron. 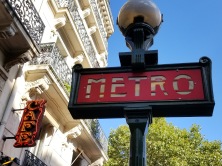 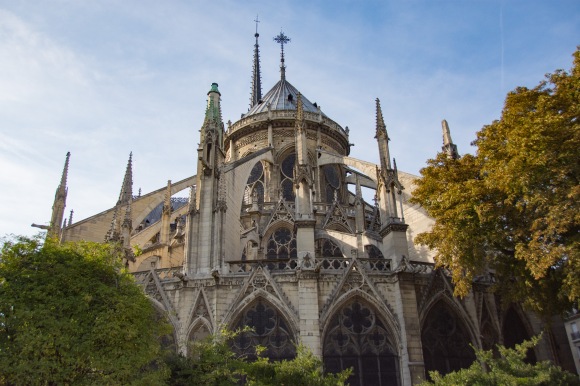 My birthday draws to a close on this continent and with it I reach the end of my candle, so to speak. Luckily, it’s towards the end of an exceptional dinner at the unpretentious yet brilliant Restaurant 52; we’re at an outdoor table on a bustling but not overwhelming rue Parisienne…and there is a split-second realisation that there is nowhere on earth I’d rather be at this exact moment. Merci, C.

The first spark of birthday wisdom arises: one thing Parisiens do much better than the rest of us is savour…moments, fine food, warm smiles, small celebrations.

Vendredi: As if to thumb our noses at age, we set off the next morning to visit The Catacombs (not before indulging in the nothing-less-than-indulgent BBB petit déjeuner, which, on its own, is worth staying here).

If history was taught as a travel adventure story rather than dates and names, I might have become an anthropologist. This day’s lesson is that the stone used to build much of Paris’ lovely architecture like Notre Dame and the Louvre was quarried from the vast limestone deposits beneath the city. A network of pillars and tunnels were created to bolster against collapse, but 500 years of mining began to take its toll. In 1774, Rue d’Enfer lived up to its name, opening a 30+ metre-deep sinkhole that threatened to consume a neighbourhood if something wasn’t done. It was decided to turn a portion of these underground tunnels into an ossuary to alleviate the overcrowding of the city’s cemeteries (neighbours were complaining; perfume shoppes couldn’t keep up with the, erm, bouquet). Ultimately, somewhere between 2-6 million corpses were interred unceremoniously in what became The Catacombs. The place is fascinating, actually, these meticulously-laid bones, layered skull upon femur, bottom to top; Jenga-like stacks along the walls of the mine shafts. The sign above the passageway as you enter: Arrête! C’est ici l’empire de la mort. 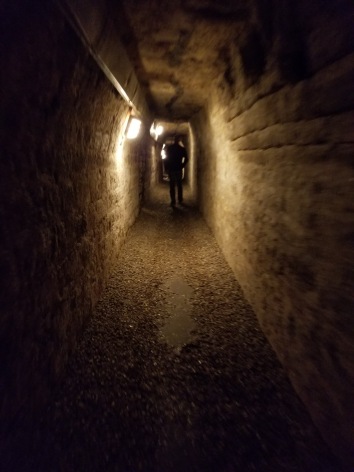 Mine tunnels in the Catacombs 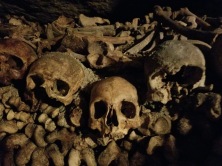 As you do after seeing piles of centuries-old squelettes, we wend our way to the Quartier Latin and a proper crêperie for lunch, people-watching as we sip cidre (the real kind!) from bowls. This day is like a postcard, vraiment, tho we’ve dubbed it Day of the Dead. We toast to not being quite ready yet. Next up, Le Panthéon. The building is itself a magnificently-carved statue; once a church, it is now a mausoleum, housing not only the likes of Victor Hugo, Voltaire, Marie Curie, Antoine de Saint-Exupéry and Rousseau, but also Foucault’s Pendulum (I simultaneously rue and thank Umberto Eco upon seeing it). The panoramic view of the city from le colonnade is unexpected and spectacular; well worth the climb up the hundreds of steep stone steps. Who says you can’t earn adventure points* in Paris?

View from lunch: the Panthéon

View from the top of Le Panthéon

Views viewed, we wander across the Seine in search of Shakespeare and Company, a gorgeous, independently-owned bookstore near the banks of the river. It is because of shops like this that Amazon can’t ever fully win. Shakespeare and Company is situated at kilomètre zéro, essentially the centre of Paris. So, we did that too. And, later, wine and charcuterie and an encounter with some drunk Danish guys to round off the evening. Because, you know, Paris.

Samedi: Le Louvre, les escargots, le fromage, le tarte tatin, Les Tuileries, a climb to the top of l’Arc de Triomphe (the view from Le Panthéon was better) and tea on the Champs Elysées, finding the ones to which all other macarons aspire. Adventure points awarded for both the eating of escargot and the extraction of said snails from their shells with the bistro’s creaky snail tongs. 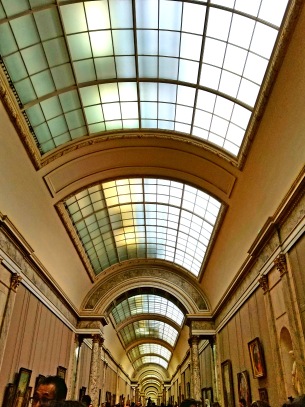 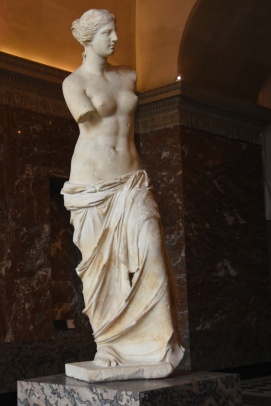 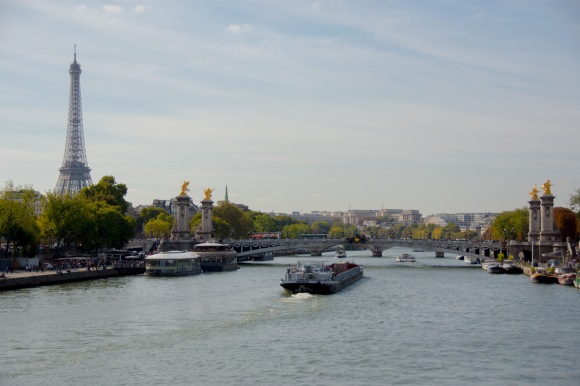 Boston, where I live, is among the oldest established cities in the US, a mere infant compared with Europe. So being in a bustling Paris, where (centuries-) old meets (relatively) new every day and rides the metro to work, it’s like a history lesson of the evolution of Europe at each corner. In French. C’est chouette.

Perhaps we’ll dedicate this day to the iconic symbols of excess of la Ville-Lumière.

For the final dinner of birthday weekend, our hosts recommend Brasserie Julien, an exquisite classique Art Nouveau brasserie, mere blocks from the B&B. One does not have to do much more than swap out diners’ vêtements to imagine the likes of Edith Piaf and Jacques Brel singing as their artiste friends fill the tables here. We indulge in an absinthe aperitif and beaucoup de champagne with our meal, which is as delectable to the palate as the decor is to the eyes. 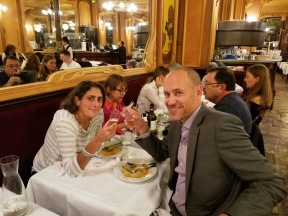 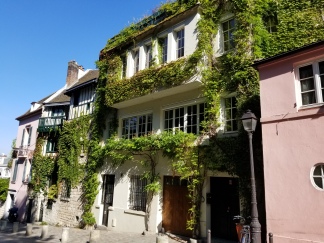 After this, it’s trains, planes, and, unfortunately, delays, as I make it into my own bed by the stroke of 1 am. Visions of a fin de la semaine parfait dancing in my head.

Dernières pensées: An understandable amount of time was spent this weekend talking what-ifs and pondering what-nexts; reflecting on this place we find ourselves (metaphorically and literally), mid-way or more through the short time we have here…in Paris, in this lifetime, and is there a difference?

I feel a combined envy of, and something like inspiration from, the laissez-faire nonchalance in which revelling Parisiens congregate. At the same time, there’s a pang of melancholy for those things you can’t get back: youth, missed connections, crossed signals, diverging paths, bad timing, unspoken words. So I focus on the present moment, and a fantastic weekend with a wonderful human…where or whether we tango again is in the hands of a certain elephant-headed god**. 🕉️

*C and I devised the system of Adventure Points a year or so ago on a hiking trip in Sardinia.

**Ganesha, Indian god and remover of obstacles, metaphorically weaves his way into our lives, injecting humour and roadblocks; opening doors and shining light on possibilities. In the couloir of the B&B is a stone sculpture of elephants. There are always elephants. Sometimes they sit just outside the room.