[Part I: Kalahari before the safari]

When I was little, if you asked me what I wanted to be when I grew up I’d say a Nat Geo photojournalist, the photo bug gifted to me by my father. It’s certainly the reason I started a travel blog: to release the words in my head about the places I’ve been, together with the photos, to complete the story (much easier in digital). My early-on adventures were in 35mm and pencil-on-paper. Midnight jungle hikes and diving the Blue Hole and Lighthouse Reef in Belize, Mary’s Place in Roatan; the Arizona desert, the mind-blowing ruins at Tikal…

But here I am, 12000km from home, packing a bag to spend the night camping in the Okavango Delta. Yesterday, we took a low-altitude flight over the Delta, mesmerised by the maze of animal tracks in the dry desert grass that map the routes to the best watering holes. The herds of toy animals below ironically reminded me of a Nat Geo special, and I only know it was real because I have the pictures on my camera, telling a thousand words for every giraffe, elephant, zebra, impala, hippo and water buffalo seen from above. Even today, writing about the experience, it seems like a vivid dream (inclusive of massive turbulence!). Neither words nor pictures can do justice to the enormity that is the Okavango Delta. Roughly 20,000 square kilometers in size, the Delta stretches from the northern border of Botswana and its fingers fan out towards the Kalahari Desert. A multitude of endangered species call this place home: cheetah, black rhino, African wild dog, lions and a multitude of birds. If we have the chance to see even one of these beasts on the course of our trip, it will check multiple boxes in my life’s wish list.

Expanse of the Okavango Delta 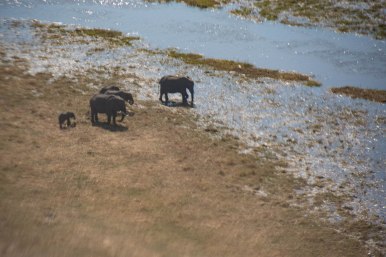 Let it be known that I am an elephant freak. Peut-être the reason I gravitate towards Ganesha, I don’t know. And before this trip, I had never seen an ele outside of captivity. I had it in my head that there would be a moment where my heart exploded upon seeing my first elephant in Africa. It just so happens that the first wild elephant I saw in Africa was out a bus window, driving down the Cross-Kalahari Highway at 70km/hr (little did I know then that the once-in-a-lifetime elephant experience was to come on my last full day here).

Safari vehicles shuttle us to the launching point where a flurry of activity is readying mokoros (dug-out, flat-bottomed canoes – once wood, now made of fiberglass) to ferry us from the fingertips of the Delta to our campsite some kilometers farther in. Our poler, Papillon, expertly maneuvers us through the hippo highways and back roads of the Okavango, through the Delta reeds that mask the myriad animals watching our parade of canoes. It feels like we’re floating, which we are of course, but it feels lighter and quieter than a traditional canoe or kayak somehow. The water is so still, it’s like a mirror magically guiding our craft along ancient paths. At the end of one such path, we pause by a larger pool to watch a hippo family playing and cautiously checking us out – popping in and out of the water, one by one, with a unique “spluff” that sounds not unlike a whale spouting. Papillon, chatting along the way giving us names of birds and history of this magical place. The polers have an organised association here, shuttling tourists around the Delta. The government of Botswana issues exams for different level of naturalist; each of our polers seem to possess several levels of knowledge of the flora, fauna and ecology of this region. 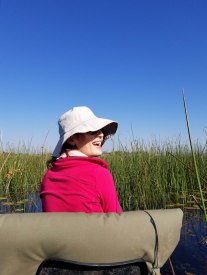 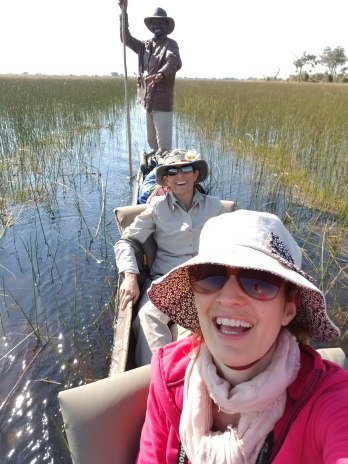 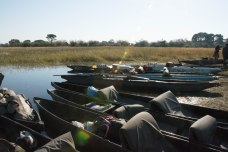 Hippos weigh more than a small car, can apparently walk up to 1km underwater (they don’t swim) and are considered the most territorial of animals in the Delta, killing more humans than any other animal here, not for a quick snack but in defense of their domain. We’re wary but excited to see them snarfle-surfacing nearby. I keep thinking it feels a bit like being inside a Nat Geo safari special, except the air smells like a sweet mixture of camp smoke and sagebrush. Still the silky texture of the air prevails. It is flat for kilometers and miles; only reeds distinguish wet from dry land, and even that depends on the season. 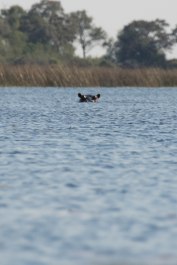 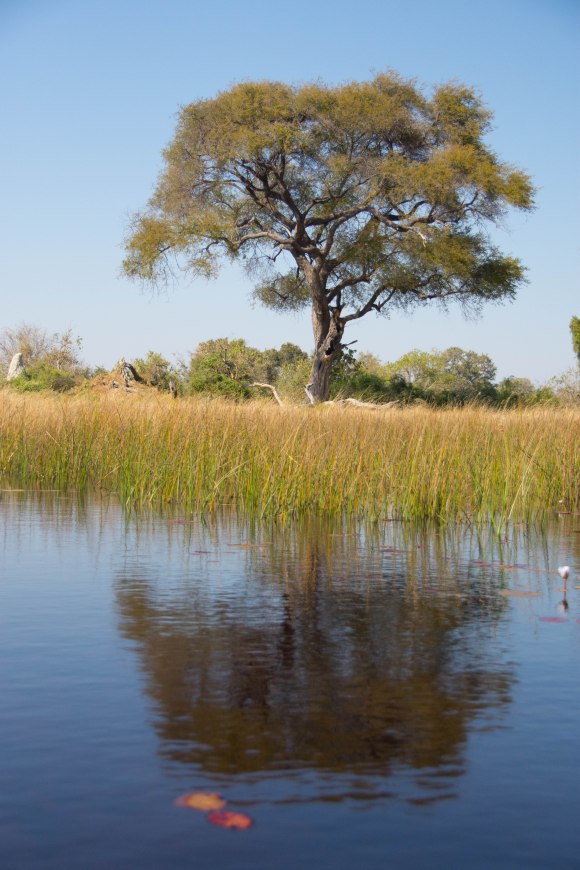 We arrive at camp after about an hour and a half through the wetlands, eat lunch and venture out for a quickie bush walk with one of the guides. This introduces us to the expanse of the Delta on eye-level. It’s nearly unfathomable, its size, and the volume of life this place contains; again, it feels almost surreal. As we walk, the delta grasses appear as if they are waiting out the mid-day heat for the afternoon traffic to resume. I learn that the pervasive desert sage is an insect repellent, though to my surprise and relief (malaria pills in tow), I’ve seen very few mosquitoes. One thing is certain: I will never again smell sage and not instantly be teleported to the Okavango.

As we saw from the air yesterday, there is a complicated matrix of animal trails, crisscrossing their way across the grasslands. From the ground, the trampled, well-used paths reveal myriad tracks and we see elephant and lion footprints; also antelope and zebra scat (we know they know we know they’re here). Two maribou storks (a humongous Sub-Saharan flying beast, listed in the Ugly Five according to our guide) circle in the sky above; desert grass waves in the slight breeze. Our eyes and ears are pealed for any sign of the Big Five before we head back to camp to rest before our sunset bush walk.

Our tents for the evening 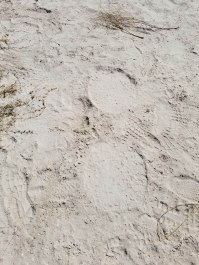 It’s day’s end and animals* are on the move from their mid-day siesta to grazing or hunting grounds. We’re walking farther into the Delta and we’ve gone by mokoro across to another island to see what we can spot. It’s a prickly anticipatory feeling, knowing you could be prey, depending on who or what you come across here. This feels different from any other hike I’ve been on – all senses alert for shifts in wind, rustling grasses, animal behaviour, signs of tracks or fresh poo.

There are reedbok antelope bounding, tigger-like through the tall grass. Cats are elusive this evening, but we see a dazzle** of zebra grazing in a field not 100 metres away. They notice us, but continue alternately grazing and keeping watch, as is their nature. It is incredible to observe them interpreting their continuously-changing surroundings. They all alert to some unseen hazard in the trees nearby, moving en masse just slightly Eastward before relaxing and resuming their meal (enhancing our photo-op in the process). 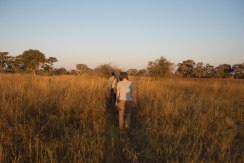 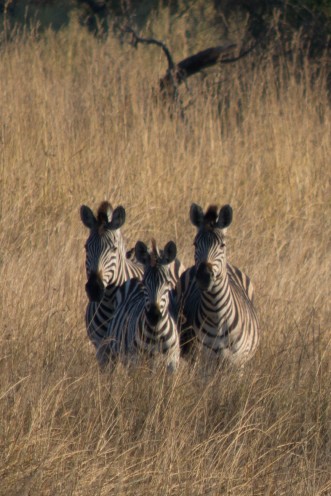 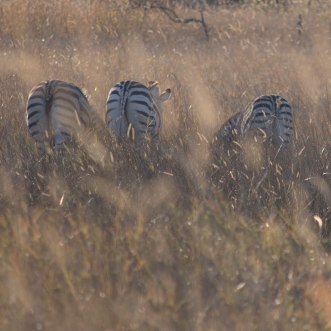 We race the sun on our way back to camp, the African sky is fire against the wheat-coloured plains. We see more zebra, impala, birds, and as I’m disembarking the mokoro, a tiny elephant shrew (a member of the lesser-known Little Five) bounces into view at my feet, doing its best kanga impression.

The sun sets as we arrive back at camp, and while we didn’t see an elephant this time out, I know this walk is a mere appetizer for what we’re to see in the days ahead. Already I want to spend an extra week here in this spot (despite the warnings about straying too far from camp and a strong suggestion on checking the bush for the glow of eyes before going to the toilet).

The magic of the savannah overshadows the night’s activities only slightly: we’re eating grilled food around an open fire in the Okavango Delta, listening to our polers sing songs from this part of the world. Laughter abounds. I’m lucky to be here, I think, and haven’t even seen an elephant up close yet.

We venture back to the mainland in the early morning hours 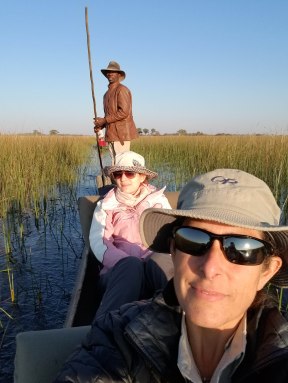 [Part I: Kalahari before the safari] Stay tuned for Part III: the magic of elephants

*Animals of the Okavango

There was an error retrieving images from Instagram. An attempt will be remade in a few minutes.